What Is Internet Bank Fraud? 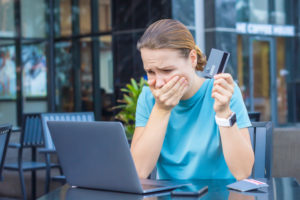 Any fraud involving a bank is taken seriously by the federal government as it can impact financial institutions, which are regulated at the federal level. While this comes in many forms, an increasingly popular category is internet bank fraud, in which the fraud is carried out using the internet. If you are accused of these crimes, a bank fraud lawyer will be critical in your defense as they help you navigate the complex legalities of both banking law and the nuances of the internet.

What Is Bank Fraud?

The underlying crime in these cases is bank fraud, which is using deception to steal money or assets from a bank, financial institution, or bank’s depositors. Financial institutions are legally defined as including credit unions and banks that carry federal insurance. This can include Federal Reserve banks, the Federal Deposit Insurance Corporation (FDIC), mortgage lending agencies, and any other institution which accepts deposits of money and financial assets.

Bank fraud will involve any deliberate and knowing action with the goal of defrauding financial institutions. This could be intentionally receiving assets, money, securities, credits, or property through the use of a pretense of false information. The actual law leaves room for interpretation of bank fraud as it can contain many factors.

When the above actions take place using the internet, they are a special category of bank fraud. This often means an individual gains access to an account and transfers funds using that online access, though it could also mean a website is created to siphon funds or a number of other instances. Even if the victim transfers the money themselves, if they have been knowingly misled, it can be considered fraud.

While internet bank fraud has a lot of manifestations, some of the most commonly defined include the following.

Phishing: A victim is directed to a fake website, usually via email, which has been made to appear as if it is a legitimate source. The victim then reveals personal information, including banking details, on that website.

Vishing: This is a form of phishing in which the defendant calls a target and poses as someone from a legitimate organization, often an internet provider or telephone company, and attempts to gain private information, including financial details. If successful, they use this information for fraudulent purposes, including access to funds.

Malware: Malware is malicious software, like a virus, that can be hidden in attachments and downloads. When initiated, malware can interrupt online banking sessions to present a fake screen where you enter your passwords and personal details. This information is then made available to the perpetrator, who accesses your private account.

ID Theft: In this case, personal details are stolen to take over accounts and open new accounts in the name of the victim.

Because of the serious nature of these crimes, and because they are federal crimes, there can be extreme penalties when convicted of internet bank fraud. The U.S. Code 1344 sets forth these rules, which include both fines and prison time. The severity of these penalties will be based on the specifics of the fraud, including how it was committed and how much money was stolen.

The code allows for a fine of up to one million dollars and a prison sentence of up to 30 years.
In order to be convicted, a defendant does not have to actually receive or use any funds. The law does not delineate between attempted fraud and successful fraud, as long as there is knowing and willing intent to engage in the fraudulent activity.

In some cases, someone convicted of bank fraud may also be required to pay restitution back to anyone who suffered a loss due to the scheme. This is in addition to the federal fines that can be imposed as part of sentencing.

The prosecution’s burden will be to prove not only that bank fraud occurred online, but also that the defendant did so intentionally. A bank fraud attorney will likely try to prove that the defendant did not know they were misleading the victim and did not intend personal gain from their actions. Some cases can also be defended as puffery, or exaggerations made as a sales tactic that do not cross over into the category of fraud.

These complexities are difficult to understand, which is why it is critical you retain the services of a skilled bank fraud attorney to help walk you through legal proceedings.