What Is Honest Services Fraud? 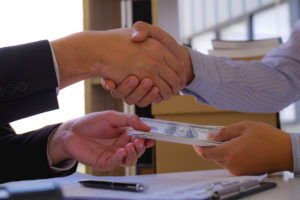 Much of the contention around honest services fraud comes from trying to define intangible rights. Originally, being denied intangible rights referred to instances where government officials did not function “openly and faithfully” in their services. Now, most fiduciary, privileged, or employment relationships are held to a similar standard, as long as any breach would be covered by tort law. These rules don’t require money to change hands, nor does the attempt at fraud need to be successful. Breaches of fiduciary duty or failure to disclose a conflict of interest are charged as mail and wire fraud.

A 2010 Supreme Court case, Skilling vs. United States, determined that this statute can be applied only to “bribery and kickback schemes” and not to “undisclosed self-dealing by a public official or private employee.” While this helped focus the law, many people are still charged with honest services fraud, leaving lower courts to define the boundaries.

The court then has the discretion to decide what constitutes “honest services” in each situation, with no hard and fast rules surrounding this definition.

Because of the nature of these charges, a white-collar criminal attorney will be necessary to help argue for the proper definition of terms and application of them to your case. Navigating these cases alone can be particularly challenging.

Honest services fraud is a felony crime, with a maximum penalty of up to 20 years in prison and a fine of $250,000 for individuals, along with three years of supervised release. When the defendant is a financial institution, the maximum is 30 years. Each transaction related to the fraud is a separate offense eligible for these maximum penalties.

One current example that many people have heard of is the college acceptance scandal involving several celebrities. In this case, the coaches were considered to owe a duty to the universities to find the best athletes possible for their team. By accepting bribes to promote students without athletic ability, they violated that duty. In another recent case, Yale University coach Rudolph Meredith pled guilty to honest services wire fraud after obtaining money and property in exchange for admitted students to Yale as a part of his team.

Charges are also often applied in the case of insider trading, where the defendant executive or employee is said to have deprived the company and its shareholders of the honest services owed to them.

When applying the definition of bribes and kickbacks, common examples may include a public official awarding a contract to a company in exchange for the company sharing their commission with entities that the official has interest in.

If you’re unsure whether a specific case may be considered honest services fraud, consult with a white-collar crime lawyer today.