What Is Bank Fraud? 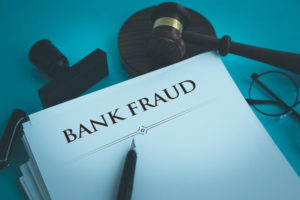 Bank Fraud is an illegal action using deceptive means to take possession of money, property, or other assets from a financial institution or a bank’s depositors. Similar to other fraud crimes, bank fraud typically involves conspiring in order to gain money or some other asset, but unlike bank robbery, bank fraud is non-violent. Bank fraud is a serious crime that could incur significant penalties and jail time, and fighting a bank fraud charge always requires a bank fraud lawyer.

Under US law, there are many types of bank fraud because the definition of bank fraud is very broad. Any scheme or plan to defraud a financial institution in order to obtain money, assets, or something else under the bank’s control can be considered bank fraud. It can also be a crime committed against the depositors of a bank rather than just the institution itself. This type of fraud encompasses banks and credit institutions that are federally insured. This means that institutions that accept money or other assets (like the Federal Reserve Banks, Federal Deposit Insurance Corporation (FDIC), and other mortgage lending agencies) are legally considered banks when it comes to bank fraud charges. Laws pertaining to what constitutes bank fraud and what does not differ from state to state. In some states, writing a bad check could be considered bank fraud. Because laws can vary significantly from one area to another, a bank fraud lawyer with experience in both state and federal bank fraud cases is essential to navigating bank fraud charges.

Every year government agencies investigate bank fraud crimes of all kinds. Some of the most common types of bank fraud include the following:

Forgery becomes bank fraud when an individual forges a signature on a check or when an individual changes the amount on the check (by adding a zero, for example). These forgery methods are done in an effort to cash a check that was not intended for the forger or to cash a check for more than the intended original amount. Checks are one of the most significant means of committing bank fraud. Stolen checks from individuals, mailboxes, mailrooms, or other places known to have checks in large numbers can be the target of individuals with a plan to commit bank fraud.

Bank impersonation constitutes bank fraud when someone creates a fake bank or institution and solicits deposits by deceiving would-be banking customers. This is often done online and has paved the way for a new era in phishing, internet fraud, and various online scams that have led to the proliferation of internet bank fraud scams. These scams often target older individuals and usually consist of scammers sending out emails to real customers or depositors of a bank using an email address and template designed to look like the actual bank’s email. These scams often ask depositors to log in to a fake website, disguised as the bank’s website, in order to capture sensitive personal information such as passwords, account information, and so on.

Bank fraud is a crime that carries severe penalties no matter what state you live in. Typically an individual convicted of bank fraud will be sentenced to prison time and financial penalties under US Code § 1344. Specific jail times and fees will depend on the specifics of the crime, which is why it is essential to have a bank fraud lawyer to help navigate the ins and outs of bank fraud charges. Intent is taken into account when assessing bank fraud crimes, but the US Code states that criminals could face fines of up to $1 million and jail time of up to 30 years, depending on the severity of the crime.

To be convicted of bank fraud, the government or investigating agency must prove that the charged individual knowingly and willfully acted in a deceptive manner to achieve financial gain or obtain an asset. Therefore, it is in the charged individual’s best interest to hire an experienced state and federal bank fraud lawyer as soon as possible.