Top 5 Most Common Penalties for Counterfeiting 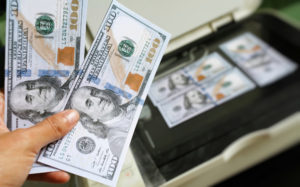 It is a violation of U.S. federal law to either manufacture or use counterfeit money, and because of the serious nature of the crime, the punishment can be harsh. Counterfeiting charges are handled by the U.S. Secret Service Office and are considered federal felonies. While the exact penalties will depend on each crime, federal statutes lay out the types of punishments available in counterfeiting cases. While these statutes provide maximum sentences, these are usually issued per charge, so they can be stacked in cases where multiple charges are levied. Below are some of the most likely outcomes if you’ve been convicted of counterfeiting.

1. Loss of Job or Reputation

If counterfeiting is in any way connected to your work, or even if you work with money and are found guilty of counterfeiting, you will likely suffer personal consequences. You may not be able to work with money again, even as a cashier or a similar role, because of your history in this realm. You can also lose professional licenses and certifications because of a conviction. Additionally, any felonies will appear on a background check, making it difficult to find jobs.

A judge can order a defendant to complete a set number of community service hours as a part of the punishment or in lieu of other penalties. The defendant will have to participate in whatever kind of service they are assigned, which could be anything from working at an animal shelter to picking up litter from local roads. The goal is to have positive engagement in the community and to sacrifice time to show remorse. This is often done when someone can’t pay a fine, but it can also be added to other penalties.

Probation is a sentence given when someone is found guilty, but the judge does not see fit to send them to prison. Instead, you work with a court-ordered supervisor for a set period of time to demonstrate that you are no longer behaving criminally. Any slight deviation from your plan can mean you are re-sentenced to prison for violating probation.

Those found guilty of counterfeiting can be forced to pay fines up to $250,000 for the simple act of counterfeiting. This portion of the fine is merely a punishment that is paid back to the government and can range anywhere below the highest number laid out in the statutes. However, if the crime resulted in a financial loss or gain for someone other than the defendant, an additional fine can be leveraged. This additional fine can also be up to $250,000.

Someone found guilty of counterfeiting gold or silver bars, or coins over 5 cents, can face up to 15 years in prison, while someone who passes or attempts to pass these bars and coins can be sentenced to up to 5 years. A person who puts parts from two or more notes together to form a fraudulent note can face up to 10 years.

If you’ve been convicted of counterfeiting, a good criminal defense attorney may still be able to help you avoid the most severe of these penalties. At a sentencing hearing, the judge will listen to both the prosecution and the defense before making a decision about the appropriate punishment for a specific crime. What they are often looking for is evidence that a person will not re-offend and that their life outside of prison will be beneficial to the community. Skilled attorneys can argue this, as well as bring character witnesses and references to the sentencing hearing.

After a conviction, some punishment or combination of punishments is inevitable, but the difference between community service and small fines or 25 years in prison is wide. The best way to ensure a favorable outcome is to have a lawyer by your side familiar with counterfeiting law and the criminal justice system.