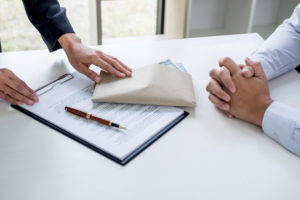 You’ve likely heard, or even used, the term “quid pro quo” before. It’s generally used to denote a scenario in which you and another party do something for each other to your mutual benefit. But many people wonder how this definition of quid pro quo differs from bribery, or even extortion, which are considered crimes. While the differences are nuanced, they’re important to understand, and they could be the difference between a simple deal or needing to work with a criminal defense attorney. Read on to understand the legal differences in these terms.

Bribery is a white-collar crime, defined by the Legal Information Institute of Cornell University Law School as “the offering, soliciting, giving, or receiving of any item of value (money, gifts, meals, assets of value, etc.) for the purpose of influencing someone who holds a public or legal duty.” The federal bribery statute, 18 U.S. Code Section 201, involves three basic elements:

Under these circumstances, the public official can also be considered guilty of bribery if they initiate, invite, or accept the bribery. This also extends to the giving or receiving of something of value in order to influence testimony before congress or at trial.

A simple example of bribery may be: a construction contractor offers a public works official a sum of money if the official will deliver a public works contract to them, even if they are not the best offer.

Like bribery, extortion is a white-collar crime that is taken very seriously. As part of 18 U.S. Code Section 872, extortion has three basic components:

While this is the primary form of extortion, other statutes define similar crimes such as a person obtaining property from another by use of force, threatened force, violence, fear, or “under color of official right.” In Evans v. United States, the Supreme Court defined extortion as the common law meaning- an offense that is committed by a public official when they take money they are not entitled to for the performance of official duties.

The “under color of official right” provision means that in order to convict a public official of extortion, they do not have to obtain property via violence, force, or threat. Instead, the coercive element is the fact that they hold public office. In this case, property can mean anything of value, tangible or intangible.

If you offer someone $5,000 to buy their boat, that is a simple contract for the sale of property. This is a quid pro quo in the strictest sense, but it is neither illegal nor unethical in nature. When the offer involves an exchange for a public official’s act, then it becomes illegal.

In short, bribery and extortion are forms of quid pro quo in which at least one member of the exchange acts in bad faith in order to achieve an unethical end. When that bar is crossed, these become criminal offenses.

When bribery or extortion is alleged, the prosecutor must demonstrate that more than a simple quid pro quo occurred. When this happens, a good criminal defense attorney is important if there is a need to demonstrate a lack of wrongdoing. The consequences for conviction of these crimes can be severe, including large fines and up to 20 years in prison, so it is crucial to prove innocence where that is the case.